The Daily Post had been asking the bloggers: Open your nearest book to page 82. Take the third full sentence on the page, and work it into a post somehow.

Forgive me, I linked this post to a wrong place and the ping-back thing had not appeared at all yesterday in wordpress… But now that I’ve noticed, I’ve changed the link…

The last time the Daily Post had asked me to look at a random sentence in a book, I had been lazy and took out an ebook, and wrote from that. I didn’t even have a book nearby. But today, however, I had a book at arm’s length. A very dangerous book, though — Linear Integrated Circuits, because I don’t even know what to write about it. Anyway, I hoped that I’d get some text about a transistor or something, and I’d write a little bit about it and somehow escape.

But do you know what I found on page number 82? 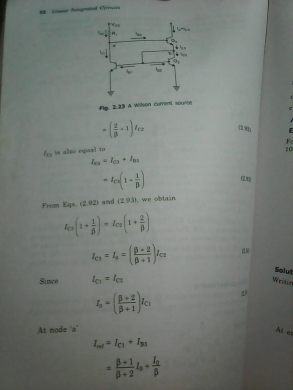 That’s right, I found this. I never expected something of this sort to pop up, given that I haven’t touched this book in years (then you must be asking why exactly this book was on my table? I really don’t know why I took it out… I kind of missed it a teeny weeny bit, maybe… but I never once opened it… and it lay there for weeks like that).

Now, let’s zoom in a bit before we start our story. I have a mobile that doesn’t have a camera (for now), and my mother’s phone has a basic camera, and I never once in my life enjoyed the high-definition-photography experience, so you might not be able to look at the above picture without hurting your eyes. I’ll take another picture of the thing I want you to see in the page — in a close-up view. With the same ol’ Nokia phone of my mother’s of course…

The circuit we’re going to talk about.

So, here… I see three transistors in the circuit. Do you see them? They’re the little things that look like vessels that can hold water temporarily, to be simply put. You do see one transistor at the left, and the zig-zag line beside it, don’t you? Meet Res, the sweet li’l resistor and his step-mum. Two others are on the right side, and labelled Q2 (the lower one) and Q3 (the upper one). You might have a bit of difficulty spotting the letters in this photograph, because Nokia’s excellent in its own way, providing me security and privacy from the cyber-strangers that are my blog readers. After all, you cannot let strangers look at your photos… It’s smart, in its own way, but no one ever acknowledges it as a ‘smartphone’, my mother’s yellowy Nokia, while the other phones that disclose their master’s/mistress’ top secret photos clearly, giving no room for imagination, the poor unimaginative, traitors of the cellphone owners are often celebrated as the smart ones.

People keep on misunderstanding the non-touchscreen, less-than-2-mega-pixel-camera phones. After all, as they say, it’s not where’re you’re born. It’s about where you die, about how much you’ve accomplished on earth. And my phone is not dead yet, (third hand and working better than it’s touch-screen counterpart) and has lived on this earth for many years without diagnosis or treatment, unlike one of its young, touch-screen counterparts, which is right now in its coffin.

They say it’s of 2 MP — MP is for Mega Pressure, and is a measure of how much pressure the cellphone’s owner is likely to face. Other touch-screen devices cause much more Pressure to their masters and mistresses, for upto 8 MP, but at the end of the day, those stupid phones are the most celebrated ones. Strange are the ways of the world… Shutterstock photos don’t come with a watermark for nothing! Shutterstock knows how to protect its stuff… and so does my mother’s phone. Conceal is the new cool 😀

Anyway, I think I have lost my cute little transistor triplets while trying to defend my mother’s camera, because dear Q2 here is running towards Q1 (the one clever transistor in the left that did not disclose its name to you earlier).

“How could you do this to me, Q1? It was I who had given the brilliant idea of adopting the homeless little resistor, but how could you keep him all by yourself?”

“I will never send you the divorce papers unless you promise me to give the poor li’l resistor back to me… after all, I wanted to have him first.”

“It’s not a matter of being first in doing something, Q2, it’s all about who Res needs right now. Even if you appeal to the court, I know that I’ll win the case. All judges are known for placing the child under their mother’s custody.”

“Stop bothering about me and get lost, Q2. Never ever stand in front of me again. Didn’t I tell you this already?”

“No Buts. You marry your darling Q3 as you had planned and have as many Resistors as you can with that stupid excuse of a transistor. Now leave.”

“Oh yes you did, Q2! There’s no point in defending yourself after you’ve come this far.”

“Mama!” cried the silent Resistor from beside.

“Oh, Resistor honey, I forgot to feed you! Wait a minute, I’ll switch on myself and allow the current to your side.”

“Oh, shut up, you traitor. Get away! Run to that deceitful Lady Q3 of yours.”

“What’re you talking about, hon? There’s no such thing as that in this world. Who keeps teaching you nonsense?”

“There’s no such thing as Papa?”

“Then why does that transistor-man often visit this house? You aren’t having any illicit relationship with him, are you?”

“You look absolutely handsome in your new tri-color rings, honey!”